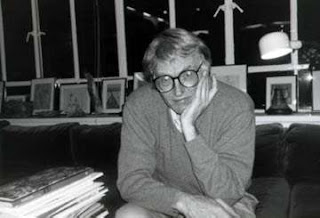 He doesn't avoid his feelings, which I respect.

I always wished there were people like him in my crit groups--people who just fucking said what they thought regardless of feelings. That's much easier to deal with, I think, than people who read and try to quietly kiss your ass with gentle words when they really hate your work. That's what criticism is for, pointing out the weaknesses. I admit I'm too nice most of the time, though somewhat less so these days, since I'm no longer teacher material--at least in a university. I think everybody is too nice.

The Shampoo (From The Nightingales) by David Wojahn

How long it must have been, the girl’s hair,
cascading down her shoulders almost to her waist,
light brown and heavy as brocade: the story I’m

remembering of N’s, remembering as my own
hair’s washed and cut, the salt-and-pepper
cuneiform to frill my barber’s smock.

Arts and Science is expanding. The wall
to the empty shop next door pulled down
and a dozen workmen slink improbably

on scaffolds butting the dusty ceiling,
cacophony and plastic tarps, the whirr
of drills that mingles with the dryers’

jittery hums, the scissors’ flash,
veronicas of clicks, the coloring, the curling,
the antique cash register,

melodious with its chime. And best,
the liquid gurgle of hands massaging scalps
the row of sinks, twelve hands and six

wet scalps in a line. I’m next, and leaning back
(let me wash it in this big tin basin,
battered and shiny like the moon)

to the hiss of warm water cataracts
and Andrea’s long fingers. But I’m remembering
the girl in N’s story, the girl

she was at six. This is Birmingham,
1962, Rapunzel-tressed girl
whose parents are more glimpsed than known,

of Saturdays when Anne-Marie would arrive
as always on the city bus by six,
before the parents’ cars would pull away.

Then the cleaning until noon, the cooking smells.
And then the big tin basin filled
at the backyard faucet by Anne-Marie,

the long brown fingers in the child’s hair,
the water sluicing, warm from the garden hose,
the soap suds almost flaring, the fingers

ten spokes over scalp and basin, their paths
through the hair and down the child’s back,
the synesthetic grace notes of the hands,

the stitchery, the trill, the body electric,
the fingertip pressure exquisite as it sings,
the braille of here and here and here.

David Wojahn, “The Shampoo (from ‘The Nightingales’)” from The Falling Hour. 1997.


*
Narrative poems like this one exasperate confuse and (increasingly) infuriate me.

First of all, what's Wojahn doing in this hair salon getting his hair shampooed, why doesn't he just shampoo it at home in the shower like most people? He seems to be a regular customer here, since he knows the hairstylist by name (line 23) . . .

In other words, he's doing something most of us don't do, and in reality

most people can't afford to have their hair shampooed at a salon,

he's doing something unusual but he doesn't acknowlege that fact, nor does he offer any justification for this abnormal practice——he's not a moviestar for chrisakes, so why—whatfor?

The poem is from a 1997 book, so presumably this hairparlor scene occurs in the mid '90s, in retrospect a kind of golden age of prosperity for some if not most in the US, post-Cold War surplus and surfeit, the Clinton years of flush expenditures—

the salon's business is booming, its chairs are filled (lines 18/19),

profits are rife and Professor Wojahn can you blame him wants to look as prosperous and spif as your average tv-anchor,

coiffed to the max—

And this is before he gets wound up. Well worth the read.

I remember, in the only poetry class I had with him, the way he would shake the poem-page in his hand, and (in my case) say something 'I just don't understand these line breaks.' Of all the many things he must have said about my work that semester, that's what I remember. And it's helped me. I don't know if I'm better now, but I have his voice in my head whenever I break a line.