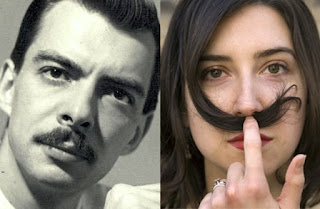 Weldon Kees has been gone close to 60 years, but he continues to inspire. The Nebraska-born poet, who also wrote fiction, composed jazz, and produced experimental films, is the animating spirit behind Kathleen Rooney’s book Robinson Alone (Gold Wake Press, 2012). In her new collection, Rooney pays homage to Kees’s best-known work, the four Robinson poems that he published before disappearing in July 1955. (His car was discovered in a parking lot near the Golden Gate Bridge, his body never found.) James Reidel, author of Vanished Act: The Life and Art of Weldon Kees(University of Nebraska Press, 2003), interviewed Rooney for the Poetry Foundation. They spoke about why Kees is an invitational writer, what Nickelodeon has to do with poetry, and the aesthetic elegance of disappearance.

Robinson was considered a doppelgänger of Kees, an urban and urbane Robinson Crusoe. Why write an entire book of post-Robinson poems?

The Robinson series is one of Kees’s projects that I would have liked to read more of, but there isn’t any more. Not to say that the four poems aren’t “enough” or that the series feels “unfinished”—if anything, I admire Kees’s economy—but I really love the poems and their mysterious, quasi-alter ego, and I wanted to see the story continue. One of the poems in Robinson Alone concludes with the couplet “Incompletion makes people / want to fill your blanks in.” The impulse to create, I think, often comes from this feeling, even if it’s not always as direct as it is in the case of my post-Robinson poems. Probably a lot of writers could tell you vivid and specific stories of the writers they read who struck or inspired them in such a way as to make them want to create their own work; I think of these writers as not just “inspirational” but “invitational”—like what they’re doing is an invitation to try to do it yourself. Kees is an invitational writer for me.

An example of this invitational phenomenon that sticks with me is from an episode of the Nickelodeon kids’ show The Adventures of Pete & Pete, which I watched all the time growing up. Little Pete is on his way to school, and he passes a garage band that happens to be rehearsing a song that he falls head over heels for. He can’t get it out of his mind, but when he comes back later, the band has disappeared. Ultimately, Pete realizes that the only solution (in the absence of ever finding the band again) is to start his own band and make his own songs. The Robinson poems are like that to me. More.