The crunch of rotted wood and mold
as the pitchfork bites in, then pulls.

The wobble of unruly wheelbarrows
down the cobblestone path of the park.

Raking the mounds over patches of dirt
in the grass, around trees and bushes,

next to the stone wall.  The body groans
underneath the screaming yellow T-shirt

slashed with the sponsor's name.
A day off from work to work harder.

Those who did and do this every day,
who scratch life from indifferent soil,

don't joke about beer and back rubs,
or watch a perfect ass in taut gray pants

Life somewhere might be limited to
a woman who has sagged with work and children,

whose face is a soft puddled smile
that used to light like a lover's moon.

But here, I get this T-shirt,
and we stop at noon for free pizza. 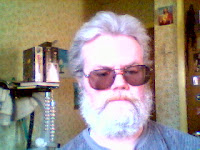 JBMulligan has had poems and stories in several hundred magazines over the past 40 years. He has had two chapbooks published: The Stations of the Cross and THIS WAY TO THE EGRESS, and two e-books, The City Of Now And Then, and A Book of Psalms (a loose translation from the Bible). He has appeared in several anthologies, among them, Inside/Out: A Gathering Of Poets; The Irreal Reader (Cafe Irreal); and multiple volumes of Reflections on a Blue Planet.