By Heather Sullivan July 28, 2017
Hunting Dinosaurs With A Needle In My Arm

I don’t believe in heaven
I do believe in vodka
I did quite well in college
But I struggle in life
I never, ever confuse
One with the other
I know that youth is privileged
And forgiving
I know that middle age
Is not 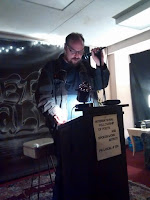 Mark S. Borczon is a poet and caregiver from Erie, Pa. He will publish his first book of poetry in over twenty years through Nixes Mate press later this year or early next. He is the father of three awesome daughters who teach him love on a daily basis. In his free time he is a talented banjo player and a guitar player who knows how to find all the notes. He is terrified of the internet so this biography is written by his identical twin who loves him and admires his work as only a brother can.