In Kansas Thinking of You
for cherie

ted berrigan would never text
with his fingers
along your skin
he would call you
to borrow some money or pills
he would give you some story
about how the moon looks beautiful
while sipping a pepsi
he would use strong words
& dance nude with donna dennis
on your parents front lawn
they, your parents, would offer him
iced tea & cucumber sandwiches
while talking about the moon landing
about how it seemed like a lot of work

& all i have to offer you is the kansas wind
something of the earth
my own thoughts on love
which i know isn’t much.


The Goats in December

the river has a lovely singing voice
when you place your hand
over its mouth. 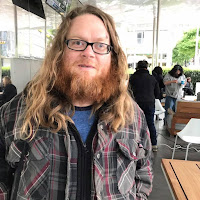 John Dorsey lived for several years in Toledo, Ohio. He is the author of several collections of poetry, including Teaching the Dead to Sing: The Outlaw's Prayer (Rose of Sharon Press, 2006), Sodomy is a City in New Jersey (American Mettle Books, 2010), Tombstone Factory, (Epic Rites Press, 2013), Appalachian Frankenstein (GTK Press, 2015) Being the Fire (Tangerine Press, 2016), Shoot the Messenger (Red Flag Press, 2017) and Your Daughter's Country (Blue Horse Press, 2019). He is the Poet Laureate of Belle, MO. His work has been nominated for the Pushcart Prize. He may be reached at archerevans@yahoo.com.