Mercury Must Be In Retrograde or Some Bullshit

You slap yourself. Then you slap
yourself again harder. You tell
your wife this is no way to live
You tell your wife that you want to kill
yourself. You puke again

It's okay, she says, it's okay

You've been so nervous for so many weeks now
that there's not enough klonopin left to do the job
even if you really wanted to. And you did

hidden up under its shell

It got better, I guess, as I got older
but never quite to what I wanted it to be
which was something worth writing home about

Now, it doesn't work
bipolar meds and whatnot

Usually it's men, sometimes women
Often it's in a meme
Often it's directed at Trump and his imagined
small penis

Almost like it all boils down to a dick. 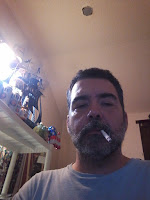 Daniel Crocker's work has appeared in The Los Angeles Review, Hobart, Big Muddy, New World Writing, Stirring, Juked, The Chiron Review, The Mas Tequila Review and over 100 others. His books include Like a Fish (full length) and The One Where I Ruin Your Childhood (e-chap with thousands of downloads) both from Sundress Publications. Green Bean Press published several of his books in the '90s and early 2000s. These include People Everyday and Other Poems, Long Live the 2 of Spades, the novel The Cornstalk Man and the short story collection Do Not Look Directly Into Me. He has also published several chapbooks through various presses. His newest full length collection of poetry, Shit House Rat, was published by Spartan Press in September of 2017. Stubborn Mule Press published Leadwood: New and Selected Poems—1998-2018 in October 2018. He was the first winner of the Gerald Locklin Prize in poetry. He is the editor of The Cape Rock (Southeast Missouri State University) and the co-editor of Trailer Park Quarterly. He's also the host of the podcast, Sanesplaining, about poetry, mental illness and nerd stuff.