By Heather Sullivan February 14, 2020
Don’t Want
Air Sickness
is a walk in the park
compared to
withdrawal, they say
we are free to
move, to fall
about the cabin.
I have a nightmare
I meet her boyfriend
while standing in line at the Walgreens pharmacy;
he lets me know in low, burning tones
the way she likes it,
the way it was going
to stay, he said, lightly gripping
my elbow like a prison guard
leading a skel
back to his cell. “she makes me
crazy enough to bust a motherfucker,”
he says, “and you don’t want that, you don’t
want it here, right?” I shake my head, then
nod, as my turn comes
at the Walgreens
window;
the pharmacist slides my package
across the counter. We hit it, that
turbulence, more and more
turbulence, yet the woman
in question stays right there,
in my mind,
a kind of living grief in bas relief;
then I’m back
on the plane. We continue
our climb.
I whisper
to the flight attendant
struggling in the aisle,
as she’s swaying there,
with a tight-lipped
smile and her tray of drinks. I say,
listen, I say, listen I don’t want
this anymore. 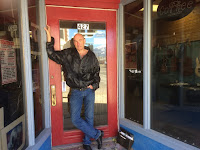 Dennis Mahagin is a writer and musician from Montana.
His poems have appeared in magazines such as Exquisite
Corpse, Juked, Thrush Journal, DecomP, Oddball, Unlikely
Stories, 3 A,M., Stirring: A Literary Collection, and  previously at Live Nude Poems. Dennis has published two poetry books:Grand Mal, from Rebel Satori Press, and Longshot & Ghazal, from Mojave River Press. Dennis is the poetry editor for Frigg Magazine. He runs a music store in a town called Deer Lodge.