January stumbles in with a pained whisper,
hungover mornings and cold feet on hardwood.
It's not the failure of good intentions we look
forward to. It’s the steady reminder of dust
falling on the tongue. This year, I'm going
to get in shape so I can break every heart
that ever broke mine, get rich and buy the bank
that owns me, find the volcano with the elevator
that goes to the center of the Earth, where the giant
ants live. They have the best coffee and sweet rolls.
Everyone knows that. When the sky falls, it's easy
to find malleable chickens under all the rubble
and hope that they've learned something useful
from the pressure. Until then, it’s a matter of waiting
for the splinters to attack, when all the tweezers
have gone dingo. What’s that ahead? Desert,
then jungle, then more desert, then a rest area
in the shape of a pumpkin that only sells plastic
daffodils that smell like your mother before she died.
At the door the bouncer looks you up and down. Shakes
his head. The only reason they let you in is so they
can kick you out between sets. Quotas must be met.
Someone once told you there could be more than this,
but you suspect they were just trying to get laid.

Raised on a rice and catfish farm in eastern Arkansas, CL Bledsoe is the author of more than twenty books, including the poetry collections Riceland, Trashcans in Love, and his newest, Grief Bacon, as well as the Necro-Files novel series and the flash fiction collection Ray's Sea World. Bledsoe co-writes the humor blog How to Even, with Michael Gushue located here: https://medium.com/@howtoeven He’s been published in hundreds of journals, newspapers, and websites that you’ve probably never heard of. Bledsoe lives in northern Virginia with his daughter. 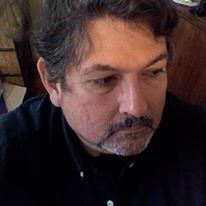 Michael Gushue is co-founder of the nanopress Poetry Mutual Press. His books are Pachinko Mouth, Conrad, Gathering Down Women, and—in collaboration with CL Bledsoe—I Never Promised You A Sea Monkey. He lives in Washington, D.C.