New York was hard to find
only if I pealed the onion,
I can pray for sleep to overtake

the stumble, into place
and stumble out, never saw
what’s in front of my face:

Life’s jugglers, clowns, the beat
masters of three card monte, I
won then the stakes got higher

in a city of nightmares,
morning, afternoon, night
feel like different places
unless troubled, they merged
into one, I was awake through all
waiting for the city to let me go

forced to sing myself to supper
by climbing the highest mountains
the trees in The Village.

On 2nd street, and Avenue C
I was lost, even with obvious
nomenclature of the corner

smack in the middle in the intersection,
my arms stretched out, Jesus,
4 AM, begging for crucifixion. 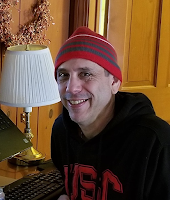 Timothy Gager is the author of fifteen books of fiction and poetry. His latest, Spreading Like Wild Flowers,is his eighth of poetry. Timothy hosted the successful Dire Literary Series in was the co-founder of The Somerville News Writers Festival. He has had over 600 works of fiction and poetry published, of which seventeen have been nominated for the Pushcart Prize. His work also has been nominated for a Massachusetts Book Award, The Best of the Web, The Best Small Fictions Anthology and has been read on National Public Radio. Timothy is the Fiction Editor of The Wilderness House Literary Review, and the founding co-editor of The Heat City Literary Review. A graduate of the University of Delaware, Timothy lives in Dedham, Massachusetts with some fish and two rabbits, and he is employed as a social worker. He is currently seeking representation for his third novel, Joe the Salamander, a semi-finalist for The Holland Prize.