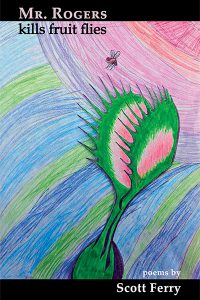 Scott Ferry is a poet of lengthy breath and a surreal logic, used to reveal the intricacies of a mind gently turned on itself. The book is divided into three sections: Mr. Rogers kills fruit flies; how to cross eyelid bridge; Divination by; each with its own character and concerns. Early in the first section, narrated by historical figures in unusual situations, Ferry stopped my poetry-musing--that pleasant state wherein one thumbs the book lovingly, looking for the good word--with the beginning lines of 'Joseph Campbell dreams of war.'

It started in the bathroom, mirror etched in ice,

the razor's rhetoric on jawline tearing up

trees and children, and here in my home!

But I cannot leave Jean unbeknown

on the lanai. I look to the East, there

is a mountain of bodies skinned bare

The odd and surreal juxtaposition of ice in stanza one and lanai in st. two can't prepare us for the 'mountain of bodies' and the lava fragrant with hibiscus and rot. The poem continues, referencing spirits as disparate as Wonder Woman, Krishna, Hanuman, Sita, and finally Charon the ferryman, whom we find does not accept credit. I appreciate the willingness of the poet to direct the reader outside the poem and pleasantly down the rabbit hole of research via these casual mentions of Gods and beings.

In the second section subtitled 'titles of children's books that will never be written' the reader finds a number of astonishing poems of genetic engineering (Gilly and the tiger wings) and fish cleaning an octopus (clockwise the sleeping octopus) and my favorite of these, "a bee in the maze of springs and wasps."

If my Queen wishes, I will go again,

past the poppies and the dripping ferns,

past the wasp Queen and the yellow-toothed den,

over the coils of high wires that crack and burn

white and gold, and the blackberry stamens

between the taut thorns of rust and red

and the backlit lavender bulbs illumined.

I suppose there have been poems from bee POV before but I can't recall them, and if I could recall them I doubt they'd be this good. The easy inobtrusive off-rhymes and near-iambic lines guide us through the bee's journey out to serve its Queen and back to serve again. I don't think I'm such a romantic until I read poems like this one. It's a great poem.

Section three falters only a bit for me, as poems of divination force me to figure out the form of the divination rather than enjoying the form of the poem, but that doesn't mean there aren't great poems here as well. "Cleidomancy: by keys," is one such example, what appears to be a simple list poem is complicated when the narrator leaves the list-making and concentrates on the metaphorical key to the present, a list of what his spouse and child are doing, and the surprises embedded in their day.

As the poem begins, "Nothing to open. I cast them in order," it finishes with "I don't need any other keys. I don't want to know." The poet has come full circle to the present, and finding no divinatory keys to the present, he decides he doesn't want them anyway.

I don't know if I've done justice to the full round of complexity in these poems; they're not difficult to read, but they're intellectually heady, exciting. Especially in the first two sections, I find a poet and writer ready to take us out of our comfortable norms and try to show us something new. That's really as much as I can hope for in a poem or a book of poems. I'll look forward to whatever Ferry does next.