By Heather Sullivan April 09, 2021
The Cold Is On Its Way; I'm Sorry I've Missed Your Calls

I was under a bridge, feeling nostalgic, but the stars reminded me
that the lowest form of conversation is, “remember when”.
Leaves were applauding themselves in the fog.
An indomitably vermilion showcase of the fleeting.
If your revelations are only second best, the heavens will call you out.
I thought it was a busy night, but everyone seemed to have gone away,
everyone except the barley harvester from Milwaukee,
whose mouth had not gone dry. We spoke of what had been done too well;
the absence of disorder in what we say, in what we think,
proves a shallow grave to leave behind. A damn mute of character.
He told me that his blue shed was covered with withering grapevines,
then mouth-missled Grizzly into the gravel. I noticed that his
saliva was webbed with blood, but I didn’t point it out.
It was a sign of shadow-teeth, grazing around an indeterminate health.
As fickley spread as we are on these frosted grounds, we are not dull.
But he knows he is not needed. I know I am not needed. 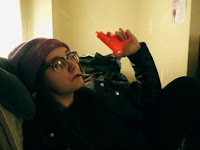 Brooke Nicole Plummer worked at a haunted house and got to use a prop that was from the Saw movies. Personally, those movies aren’t to her liking, albeit a fun stunt was utilized while performing with loosely injected, blood-seeping IV’s. However, she implores you to watch “Victor Victoria”, starring Julie Andrews, if you haven’t seen it. Or, watch it again, if you have. Her first chapbook, “Flyover, Compiled Nothings”, was self-published in November of 2018. Her second chapbook, “Shaggy Frog”, was released through Alien Buddha Press in January of 2021.