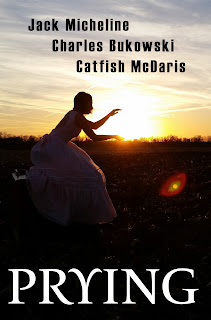 The three poets nesting cheek by jowl in this fetching 2022 reprint of the 1997 Four-Sep Publications chapbook Prying from small press dynamo Michele McDannold's Roadside Press will be familiar to anyone paying attention to even the tiniest of the outlaw poetry scene in the last 50 or so years: Charles Bukowski, Catfish McDaris and Jack Micheline. Bukowski and Micheline need little introduction; their long shadows hover over the outlaw poetry world even now years after their deaths. And the third, the only living poet of the three within, Catfish McDaris, has been building his own small press reputation with considerable success, for nearly as long as the former men. Illustrations are from Scott Aicher.

It's most fun to talk about the living McDaris. He appeared and appears so widely it's difficult to keep track and critique, or not, but as his portion of the cover copy says, he doesn't give a rat's ass anyway. We do, though, and the short prosaic pieces within are in turn ribald and rough-hewn, made to order working class historical pieces. McDaris gives you what you've come for even if unsure of what this is exactly. His work may not transcend yet like his two compadres, but who's to say whom the prevailing poetic winds will favor in the coming years? From 'If This is Love I'm Not Happy.'

I am a rainbow, Jack the Ripper's knife, a tumble weed, the petals of a rose, a worm drowning in mescaline, Van Gogh's ear, the Statue of Liberty, Hendrix's guitar. I am now. I am free. I am.

The Bukowski poems included here from the early- mid-70s when Bukowski had passed the first peak of his career and moved steadily upward and forward in reputation. in 'extant,' the first poem, Bukowski begins to riff on a melody only he can hear.

the victim is the dog of man

the victim is dog the man

the victim is the dog man

It's easy to fall into that loping rhythm, which poem is otherwise filled with non sequiturs amidst confessional moments amid the gristle and sinew of the tough guy, the beer drinker, womanizer, prophet mode Bukowski tries to live in. Still, it's Buk. You know what's on the label.

Micheline is another matter to me, a poet of various strengths deeply associated with the 50s and 60s beat ethos, if not a beat himself, who writes a headlong neo-beat or offbeat causative poem, long of line at points, next to several one-word lines. While his poems don't resonate yet like some of his contemporaries, he's due for a cultural renaissance soon, and if you can find it, pick up his selected COCKYMOON, from Zeitgeist Press edited by William Taylor. In the meantime, you can revel in these energetic lines from 'My Philosopy:'

I was born on the street of lost fools

on a sunny winter's day

howling naked to the sky

These outlaw poets retain their attraction well into this century. The beats and neo beats are now getting their just deserts with Corso's last three years of poems coming out soon and the world slipping ever so rapidly into the next decade. It's a tall order, but these small books, the festschrifts and anthologies and chaps from some random wahoo in Albuquerque to this psychotic reviewer here in Revere MA, need to publish more, review more and spread the love more. There are so many deserving poets–all poetic modes can work, said Paul Blackburn, if you work them right–to choose from, and we can talk about them till there's no blink left in your eyelids. Long live the limited edition chapbook.