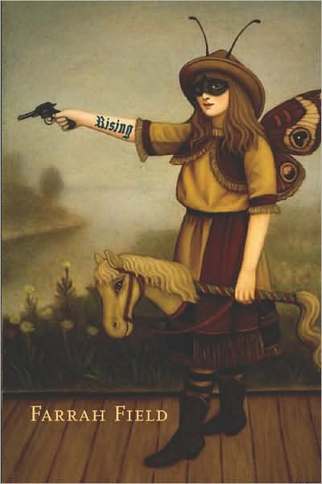 I'm really enjoying Rising, by Farrah Field. I found notice of the book somewhere on the 'net, but Google has not been forthcoming as to where, so I'm going to link to some other things I found. First, a review by Dan Magers that nearly sums up how I feel about the book:

With the rise of the literary memoir in major publishing houses, it is worth remembering that through the second half of the 20th century until very recently, the memoir was the province of verse. Farrah Field’s Rising has a pervasive energy to get down an account, avoiding the narrative-suspicious modes of Language Poetry and other narrative-resistant forms, while at the same time, digesting the devices of these schools to create poems that lean dynamically against each other. Narrative in contemporary poetry, generally, has to be able to dance more quickly through points of view, voice, and time, as well as through description and reflection. Since the memoir has taken over the first-person singular, the Frostian, "I did something, I learned a lesson” mode comes across as sort of stodgy to all except those who love parables. Instead of an amiable stroll in which we can vaguely see what is ahead of us, Field's poems pack a chapter of details into a handful of incisive lines that sweeps the reader to conclusions one is often not prepared for.

Field has the journalist’s eye and ear for detail and the novelist’s sense of tactile invention. The locations and acquired dialects are primarily (but not entirely) southern:


Snakes hang like fingers in branches,
claw through humidity, then S away.

The flashiest metaphor is the final one, a perfect merging of the visual aspect of the metaphor (the “S” you see on the page) with the imaginative (the snake “S’ing” in the scene). But note also the individual snakes hanging together in the air, making a hand through its climate. The two lines concisely evoke the atmosphere of “In Lecompte Bayou,” exceeding only by a syllable an evocative haiku unto itself. More here.


I couldn't find many poems online, and what I did find didn't really approach what I found in the book: Southernisms, sort of, with wild language and unexpected turns, all of which, or many of which, seem grounded in the same concerns I have here and at my other beast, Fried Chicken and Coffee, though the speakers seem perhaps more settled in their insider-outsider identities than I am. I like the opening of 'Possums and Critters Gets Back There' for the way it immediately assumes a level of familiarity, then riffs on Southernisms.

I am part of them like fire insurance and quick
look to the left--kinfolk stare at me by way of cuticles.

Here's another take, from John Cotter at Open Letters Monthly.

Rising, Farrah Field’s first collection, is set in the Deep South and is canny about the deep-southern landscape that popular culture (and William Faulkner, and CD Wright) has made. Poems with titles like, “Self-Portrait in Toad-Suck, Arkansas,” and “Voodoo,” and “Possums and Critters Gets Back There,” set a gothic mood: mud, rot, sex (“If you fuck someone else, I’ll feel it on you”), and superstition. Whereas the first page of Harmon’s book says “Whither,” the first poem in Field’s uses “wither.” In as many poems the speaker falls into a muddy hole, thinks on the drowning of New Orleans, watches the barn where she used to have sex get torn down, and mixes “bleach to clean up the maggots.” More here.


It's my favorite collection I've read this year, I think.