By Rusty Barnes January 18, 2010
If you ever want to know how to properly end a poem, read this. And then admire his beard. 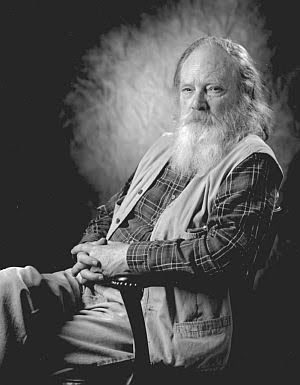 Coming home with the last load I ride standing

on the wagon tongue, behind the tractor

in hot exhaust, lank with sweat,

awkwardly along the hayrack, cruciform.

this afternoon, Marshall and I.

And of course I think of another who hung

like this on another cross. My hands are torn

by baling twine, not nails, and my side is pierced

by my ulcer, not a lance. The acid in my throat

is only hayseed. Yet exhaustion and the way

on two points of pain in the rising

Well, I change grip and the image

fades. It's been an unlucky summer. Heavy rains

brought on the grass tremendously, a monster crop,

Now is our last chance to bring in

We mow, rake, bale, and draw the bales

to the barn, these late, half-green,

or more, yet must be lugged by the twine

across the field, tossed on the load, and then

at the barn unloaded on the conveyor

and distributed in the loft. I help—

and hold up my end pretty well too; but God,

the close of day, how I fall down then. My hands

are sore, they flinch when I light my pipe.

I think of those who have done slave labor,

less able and less well prepared than I.

Rose Marie in the rye fields of Saxony,

her father in the camps of Moldavia

and the Crimea, all clerks and housekeepers

herded to the gaunt fields of torture. Hands

even the touch of air, even

the touch of love. I have a friend

whose grandmother cut cane with a machete

and cut and cut, until one day

she snicked her hand off and took it

and threw it grandly at the sky. Now

in September our New England mountains

under a clear sky for which we're thankful at last

in their first color. I look

to the notch where the sunset is beginning,

then in the other direction, eastward,

medallion hangs in a lavender cloud

beyond the barn. My eyes

sting with sweat and loveliness. And who

is the Christ now, who

if not I? It must be so. My strength

is legion. And I stand up high

on the wagon tongue in my whole bones to say

woe to you, watch out

you sons of bitches who would drive men and women

to the fields where they can only die.