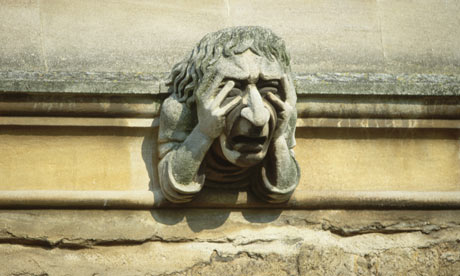 Oh no, the gargoyle sez, not dis too?

Elisa Gabbert brought this to my attention first, with a list of tricks (many/some/all) poets use in writing their masterpieces. At first I thought it was funny, then I looked in my poems folder. Urgh. Most of these quoted gaffes are actually pretty usable, I think, if you know what you're doing, which is after all how it's done: if you can get away with it, it works. Full list at HTMLGiant. Be sure to check it out, but in case you don't, here's a few to strop your razor with. Mike Young is writing--


Well, I thought that sounded like a terrific idea. So here it is, our stab at cataloging 41 popular moves in “contemporary poetry,” an exercise that’s fraught with peril, what with the competing definitions, camps, roles, and processes of “contemporary poetry,” the nebulousness of calling something a “move,” the inevitable non-definitiveness of such a list, and so on, but hey: dancing is fraught with peril too, and no one’s managed to stop me from doing that. So here we go. 41 moves. With mildly related pictures! In no particular order! Please argue and add in the comments. Many thanks to Elisa Gabbert for the bulk of the work on this list.


At least embarrassment is not an imitation.
It’s intimacy for beginners,
the orgasm no one cares to fake.
I almost admire it. I almost wrote despise.


2) Starting a line with the final clause from a previous line’s sentence and finishing it with a single short and often fragmentary sentence.


The rusting mills sprawled gigantically
along three rivers. The authority of them.

4) The “blank of blank” construction

Examples: From “Marriage Proposal” by Sarah Messer: “I want to be trapped by the cage of your ribs”

From “Synchronized Swimming” by Angela Sorby: “How did decay work its way into the theater of water”

From “I want you to see me” by Kate Greenstreet: “Red and blue and the white of my transparency”

From “Mezzotint for A” by Ben Lerner: “My better half had left me so I wrote her hemi- / stiches in the half-light of my halfway house, etc.” Jessica Fjeld’s On Animate Life: Its Profligacy, Organ Meats, Etc.


Fun stuff. Watch this space later on next week. I have some muddling-about ideas on Hayden Carruth that I'm going to put up here.