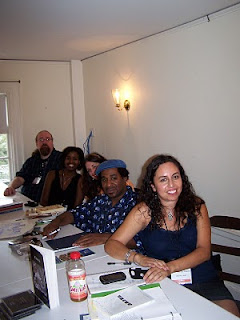 Here's a pic, stolen from January O'Neil's blog, Poet Mom (thanks!). I'm the hairy guy at the back, along with the much-less-hairy January, Colleen, Walnut and Jennifer, beginning from the rear.

I had a great time with this, even including the 45 steps to the third floor of the Phillips House in Salem MA, where the event was held. In the heat we all talked about our favorite poets, even admitting to some schoolboy/schoolgirl like crushes like mine for Frank Stanford. 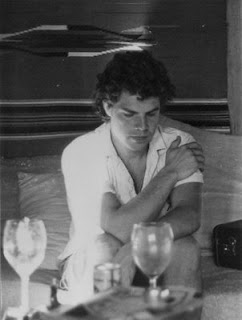 I'm an awfully fickle reader and lover of poetry as a rule. I simply dump shit I don't enjoy reading and wait for my next pass of donations to get rid of it. But somehow my fickleness has never evidenced itself with Frank Stanford. I read and read and I never get tired. If you haven't read him, I feel badly for you.


Circle of Lorca
BY FRANK STANFORD

When you take the lost road
You come to the snow
And when you find the snow
You get down on your hands and knees
Like a sick dog
That’s been eating the grasses of graveyards
For twenty centuries.

When you take the lost road
You find woman
Who has no fear of light
Who can kill two cocks at once
Light which has no fear of cocks
And cocks who can’t call in the snow.

You find lovers who’ve been listening
For the same roosters to sing
For twenty centuries
Roosters that have swallowed stones
Out of each other’s tracks
But have never met
Anywhere on the road.

When you take the lost road
You find the bright feathers of morning
Laid out in proportion to snow and light
And when the snow gets lost on the road
Then the hot wind might blow from the south
And there is sadness in bed for twenty centuries
And everyone is chewing the grass on the graves again.

When you get lost
You come to the moon in the field
The light all lovers soil
The sheet no one leaves clean
The light cocks are afraid to cross
The same moon woman danced under
For twenty centuries
With blood on her face.

When you get lost on the road
You run into the dead
Who have broken down stones
In their throats for twenty centuries
I saw two little crazy boys crying
Because it was morning
And when morning comes it comes
In the morning and never at night.

I saw two security police taking out a man’s balls
And I saw two little crazy boys
Crying by the road who wouldn’t go away
But two has never been a number
Because it’s only legal to pass one at a time
It’s only a drum you can carry but you can’t beat
It’s the evidence they need to make you disappear. 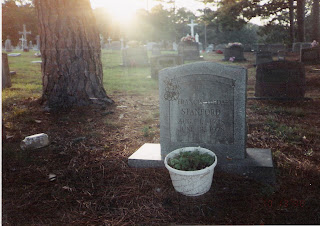