A cloud passes overhead
bringing 30 seconds
of exceptional rain.
Not enough to raise
the failing reservoirs
more than an eighth of an inch.

The cat prowls
the hallway's outer borders
looking for some
kind of prey.

The floorboards are creaking.
The room shrinks.
Sconce light begins to show its bias,
its unnatural nature
and inability to do more
than make less dim
its tiny corner of the globe.

A river could not meander
less directly.
Enter spirit of the night.
At last the world turns
imperative.  Now a dog howls
the way a dog
has howled for these
many million years.
Lights come up.
Words are shouted,
but the tone is very French.

Another cloud burst explodes
with the beat
of at least twenty drummers on the roof.
I'm awake anyway
watching the dark.
I have no exceptional worries
unless the dark begins watching me. 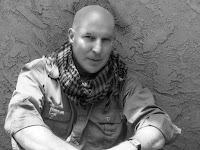 Ian Randall Wilson has published two chapbooks, Theme of the Parabola and The Wilson Poems, both from Hollyridge Press.  His fiction and poetry have appeared The Gettysburg Review and Alaska Quarterly Review.  He has an MFA in Fiction and in Poetry from Warren Wilson College. By day, he is an executive at Sony Pictures Entertainment.