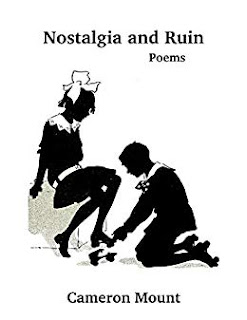 Cameron Mount's Nostalgia and Ruin is a great example of a transitional work. Mount is one half of the duo that runs the pulp magazine Broadswords and Blasters, and I get a sense that this book is very much the work of an excellent writer feeling out interesting ways what will become his permanent subject matter.


"Spring Break, The Unnamed Key," an example from early in the book, sets up reader expectations and follows through in a satisfying manner.  Simple declarative phrases set off the first half of the poem: "we took;" "we made;"we fished and caught;" we piled;" and so on, followed by simple but rich detail that gives us the feel of what camping on this unnamed key means for the poem's inhabitants, simply going through a day. "It wasn't long/before the drunk/and tobacco high/sent us rolling/through complex thoughts/and left us spinning on our cots/in sleeping bags." The short lines pile up on each other nicely before leveling out in the remainder of the poem and returning to those simple declarative introductory phrases which highlight this deceptively complex poem.


Later, there are poems which succeed or fail depending on how consciously poetic Mount chooses to be. Where simple declaratives rule, the poems succeed. In places like "Mirage," the  normal force of the lines loses focus in favor of sounding like a poem. Clouds turn into rain in this piece and truth drops to the ground, and the "I' of the poem is undone. Well. A very few poems fall into this trap, though, and I believe this is a matter of the poet feeling out how they are going to write their subjects and why.


It doesn't take Mount long to bring back that eye for detail. In "Blossom," another richly detailed poem, the narrator recalls a distracted day of  afterschool suffering. "The color of her thigh,/the pink that blossoms/into my daydreams." and the 'quick bare flash//sufficient for love" focuses the reader too on the narrator's observation in the way of many schoolboy reveries. "I meet her gaze./The way her lips part,/tongue pressed lightly/to curved upper lip. It is/enough to impose after-/school suffering." Again, a poem whose strengths are in the small details.


The last poem I want to mention is "Whiskey, Neat," which takes the drinking poem and turns it inside out. Many people write these poems, and they're generally tiresome because they vary little poet-to-poet. Here, rather than focusing on the drinking and what it means to the narrator of the poem, Mount turns his eye on the liquor itself ("I'd rather have it straight up/but a rain drop slips/into the burnt oak of my glass.") and then to everything that is happening around the drinking scene. "The brisk wind carries echoes of mourning/doves through the goosebump-dappled skin/of my bared chest." Especially note that break on 'mourning' and how it turns the line from ordinary to special, and at the end of the poem, how the poet returns to simple and rich details ("The sun winks/behind a cloud in silent collusion/with the pins and needles/in my left arm."). Finally, the poem ends back where it begins. "I don't mind the rain splashes anymore./They'll just ease the inevitable burn." Both poem and drinking interlude end with the rainwater dappling the drink and easing the burn of both insight and alcohol. Fine stuff.


I suppose I'm outlining an aesthetic in these review pages as much as anything else, but I feel as if Mount's poetry is tailor-made for that. I'm into it, and appreciate these poems very much when they stay in character, meaning when Mount details his poems first and applies poetic force as it comes naturally. Simple declarative sentences first, poetic impact second, meaning paramount. I suspect a poem that doesn't want to communicate. It's lucky for me, for all of us, that Mount communicates exceedingly well in these very successful poems. 4.5 of 5 stars.