Survival Tips for the Pending Apocalypse by Shawn Pavey, reviewed by Rusty Barnes 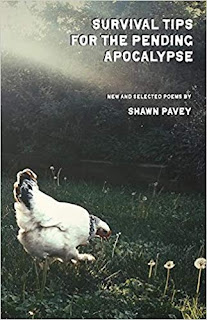 
Shawn Pavey's book Survival Tips for the Pending Apocalypse has been on my radar for some time. I travel in or closely observe the outskirts of a lot of different poetry scenes, and one of them is the midwestern ethos of Spartan Press and Stubborn Mule, among some others I am unfamiliar with yet. The poets strike me, in general. as fellow-travelers in the best sense of the word, with varied points of view united under an umbrella of beat poet, confessional poet, Tom Waits or Bukowski-oriented. Some of that can go a long way, if you know what I mean. I am pleased to report that among those fellow-travelers Shawn Pavey is someone well worth paying more attention to.

In his introduction, Mike James rightly--after reading it , how could you not?-- mentions the first quietly strong poem of this long but never meandering collection. "Autobiography" tells us more about the speaker in a few lines than we get in most poems. We know he leads "a quiet life in my place every day," "middle-aged and soft around the middle in the middle of America. where he is "fair to middlin." Note here the narrator as someone who first of all is a poet, a listener to all the things we say to one another in our own complex autobiographies, where the path of admitting everything, bad and good, brings out vulnerability, a necessity for a poet especially.

Speaking of necessities, In the title poem "Survival Tips for the Pending Apocalypse" Pavey's tips include stocking up on Texas Pete Hot Sauce plus cabbage and carrots for cole slaw, "because you can't descend/ into full-blown goddamned savagery just yet." This very funny poem finishes strong:

Stock up on ten-penny nails
and hundred-dollar bourbon:

Get used to drinking hundred-dollar bourbon.

I don't know about you, but when the shit goes down I'm headed for Pavey's fallout shelter. He'll have the good stuff. I'll trade him a couple three banty roosters for a bottle of Maker's Mark. It's the apocalypse after all. I'll go cheap.

I should mention before closing, too, that there are good lines on nearly every page. When mentioning the aftereffects of a lunar eclipse, we get lines that "[fill] a hole in the sky as big as life/as big as all this", or later on in another poem where "seeds of/ prairie grasses crack secret in the loam, yearn for/wildfires of blanketing shoots." You might quibble with breaking the line on 'of' there but the overall impact is solid.

Along with good lines, the poems fairly burst with insight. Some of them are the tried and trusted of poets everywhere, but some snap with ferocity as in "Hollow Point" where the poet repeats "all the hollow points/ hollowing bleeding bodies/these hallowed bodies of the dead." Some linger in the mind, as the aftereffects of a young boy soft-shoeing on a nearly finished sand mandala burst bright for a moment and then fade. All in all, really fine lines in good, often great poems.

This is poetry that wears its influences boldly, without shame, and will reward a patient reader who can dig an earthy poem next to a sentimental poem, meteor showers next to burst mandalas, side by side with prairie wisdoms, all of them parts of a solid collection I'll return to again and again. 4.0 stars.