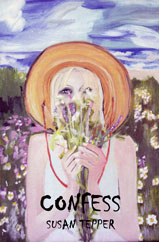 
Susan Tepper's Confess is a small intimate gathering of reflective poems from Cervena Barva Press published in 2020. One of the many problems with collecting a group of poems is that you have to decide if you want a book with some unity, not a miscellany. Miscellanies are all right, certainly, and they comprise most books of poetry printed today, but you want another unifying factor. The title CONFESS  lends itself to the illusion of forward momentum. What is the narrator confessing, and to what end?

"I come to you broken/have been trying to say/all that is not the way/it shows on the surface," the narrator says opening the first poem. They follow this statement up with a nostalgic description of an old photo as an illustration of exactly how broken they are, with the placid surfaces of the photo's subjects--Victorian women--undermined by the fact that the narrator has baldly told us they're broken to begin with. And the questions begin: broken by what? An interesting enigmatic opening move.

Many of these poems move by quickly--they're generally short--yet that consistency of mood prevails as show in this masterful short piece midway through:


Close the shutters
Allow darkness to rip
Your eyes in tide pools.


Two suitcases, side by sided,
Have yet to be unpacked.


Excuses, elaborations
Does this mean we won't stay long?


You're flattened by so many roads
I am stung and run over.


Two suitcases: it's been written
Part & Parcel by your own hand.


The minimal punctuation allows the poem to be read at a sort of angry breakneck speed, which fits it well.. While in most cases, I'd like the poet to direct my attention more, the deft use of impactful  verbs throughout rip and flatten a reader as well as speed up the poem. The art of the short line in evidence here is commendable as well.


Finally I'd like to talk about the larger question of the poem, what the narrator is confessing, and to what end. We often think of confession as something with a religious sense, with the end result being forgiveness for our sins. Or the more broadly confessional scene of the dark night wherein we confess our deepest secrets to the ones we love in the hope of gaining mutual understanding.  Or, the professional  confines of the purely therapeutic confession, where the box of antiseptic tissues is always available for emotional leavings, or even, in these Covid-19 times, the group therapy confessional of the, God help us, Zoom conference. What is Tepper's narrator confessing? My guess is a combination of these things. The poems don't strive for meaning but rather gather round and create an overarching theme: mortality. Which is what all poems come down to anyway.