After the roller-coaster dive out of the sky

I remember that step off the C-130 ramp, jogging

under generator lights, with the staccato of gunfire going

light painting the mud brick building beside me, the major

tells us thirty insurgents are dead just beyond

the building I’ve spent my first night against.  Soon after,

“prepare to move,” and we walk into this country,

the weight of a year in my chest.

As I awake before dawn, in the long tent’s double line of metal beds,

I hear two soldiers already up and in uniform say it, “Sergeant Edwards


was before I slept.  I don’t want to rise up, dress, walk down as they


move along the aisle, to find the details.  And blessedly, in this moment

No Computers” posted as I walk into the empty MWR.  Under a string


of Christmas lights, three Marines play at a pool table by the empty


phone bank’s doorway, while somewhere across the world

men in uniform approach his wife.

"Bullet,/ here is where the world ends, every time."


gutted by news of his coming, abandoned


buildings, shifting light of their burning

no one remaining to demand surrender of,


tribute from, hollow land where words


can paint a dark windstorm of bullets,


the minefields of dying, all manners

of wounding, but its figures made lampblack,


no language can lift the dead city, war's


cancer on the world 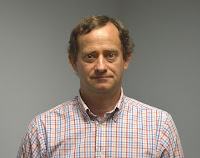 An Army combat veteran, Steven Croft lives on a barrier island off the coast of Georgia on a property lush with vegetation. He has poems in Poets Reading the News, Gyroscope Review, San Pedro River Review, Anti-Heroin Chic, The New Verse News, Ariel Chart, Quaci Press Magazine, and other places.