By Heather Sullivan March 05, 2021
How To Speak Of Death To Your Fellow Americans

To begin with, take off your funeral suit
but do not put it completely away
in the back of the spare room closet.
Do not forget how it looks on you
and how often you’ve had to wear it.

When you begin to speak, remember
that some folks have never been to
the number of funerals you’ve attended.
Some have never been to any
and will not understand a word you say
but talk anyway. Some don’t believe
people die as often or as unfairly
as you know they do

and you will not make them feel grief
easily or quickly. Talk anyway; you might need
visual aids. Some only see death
when it’s as close as the next room
so when you speak of death to them,
you will have to simulate the sound
of death knocking on the adjoining wall
to make them understand.

Some of them will smirk and speak
of Darwin and some will speak of Jesus.
All of these people will speak of what is right
and what is deserved; most will stare you down
and shout the word “justice.” Talk anyway, seeking
those among them who, even as they sneer,
will avert their eyes. Talk to them; ignore the rest.

Many of them will be the kind of people who say,
“If I die…” Show them your funeral suit; tell them
how often you’ve worn it; show them the shiny cuffs,
the worn tie tucked in the pocket after the church hall
reception; say the names of the dead and how often
they died saying, “if I die…tell them how
I was killed. If I die, make it mean something. If I die,
remember my name.”

Maybe you will say something to someone that will work
but don’t put away your funeral suit after that.
Don’t bury it deep. Don’t assume you’ll get to wear it again
only when they put you at last into the ground.

This, my body:
nondescript and hard-regretted tattoos,
pedestrian piercings, a belly hung
over the belt line, badly crusted feet,
wounds long healed in the skin if not
in the tissues below. I claim the title of
man covered in evidence of mistakes
that led to this being, this now.

Some would say do not fall into the trap of comparison
but here I am staring into my own eyes, seeing
coal mountain strip mine, railroad cut
in New England granite, shoreline wasted
under washed up oil and the garbage of decades.
I claim the title of warning shot, alarm
long ringing and long ignored.

Old friends stand aside,
watch me self-inspect; they do not interfere.
Who knows me, knows I will go hard upon
this dark body, down this long tunnel called old man,
will mine it until I can draw out gold from poison.
I claim the title: I am temple of hard road. 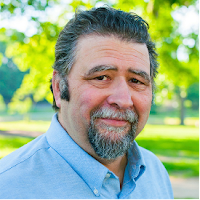 Tony Brown has been writing for over 50 years, and publishing and performing his work for over 40. A seven-time Pushcart Prize and two-time Best Of The Net nominee, he has traveled the country, slammed for the Worcester Poets’ Asylum, and organized and hosted many readings and reading series. His most recent eBooks and publications can be found through his Patreon site (https://www.patreon.com/TonyBrown). His daily poetry blog is available at http://radioactiveart.blog . He resides in Worcester, MA. Tony most commonly performs his poetry with The Duende Project in collaboration with Steven Lanning-Cafaro on electric bass and classical guitar, Christopher Lawton on guitar, and Chris O’Donnell on drums;  They have released six collections of their work, available on all the usual online streaming and download outlets. More information can be found at their Website: http://theduendeproject.com