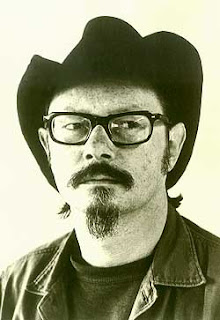 The essay goes to some trouble countering the established view that Blackburn is sexist in a way that immediately draws attention to itself, and overcomplicates reading the poems. I assumed Blackburn had been assigned minor figure status in the strange way that the canon adjusts itself to new or different criticism. I see from this essay that Blackburn seems to always have been minor status, and that's too bad. The defense (Eshleman) doesn't work hard enough to change that, but I stand here saying it needs changing.

Eshleman brings out Freud in Blackburn's defense, with over-significant broken masts and purse-seine vaginas and what have you, and discusses what he calls the three modes of sexuality in the poems, a dirty joke variety which has become the standard text of discussion and includes the few poems anthologized, along with a 'turgid sexual despair' which dominates the work of the middle sixties, and last, an "admiration and tender respect for what might be thought of as femininity in all forms" in the first half of his career. The progression implies that the late-career poems are somehow less than the remainder of his work, though still important for a fuller understanding. I find the later period more interesting than the early work, frankly, but then I'm no poet-scholar like Eshleman. And the Freud is just silly.

But it's worth reading, this essay, and makes me want to pull out my collected Blackburn again.

The quintessential Paul Blackburn poem (“Affinities II” would be a good example) is visually speaking more like a sketch (Franz Kline was his favorite painter) than a work in oil. Lines are brisk, deft strokes resulting in mobile half-stanzas, particle-stanzas, slightly assymetrical, that tilt the poem on. Whether in Barcelona or in the New York City 23rd Street “Bakery,” the Blackburn persona is generally off-stage, activated by desire, an observer scoring nodes which the reader can connect to constellate relationship-oriented patterns. The tendency is to seek out value, or as Blackburn himself puts it in one poem included in The Parallel Voyages,[1] “the whole and the flowing,” but he is also fascinated by the extent to which humankind is derailed, and redesigned, by a ritualistic emotional and material interface. The content of this quintessential poem is spare, idiomatically erudite, and only marginally introspective. It frames itself as it tracks its own material, resulting in a page design that is quite mobile, with weighted, balanced lines and word clumps: