By Heather Sullivan May 08, 2020
Bruce Springsteen Joins Aloha Shirt Man in the First Turn for a Cornfed Derby Dame Bout

Scooter van Zandt, he says while shaking my hand. He’s wearing a Jersey Devil sweatshirt, Maui Jim sunglasses, and a Cornfed Derby Dame baseball cap he bought at Kim Karsmashian’s souvenir stand. But the jazz dab from the Soul Crusaders tour gives him away. Springsteen doffs his shades and winks. He’s looking for Maria Roberts. Says she ditched her husband after his outlaw brother disappeared into the Canadian wilderness. Springsteen heard Maria took up skating on the flat rinks, jumping from one midwestern team to another. We watch Bona Petite slip through a Debbie Darko shoulder block to lead a jam against the Quad City Rollers. And five points. Springsteen studies the skaters jostling each other in the scrum. She’d be in the middle,  he says, Throwing a hip block or a can opener. Bona Petite tiptoes through a cougar trap to lead another jam. Springsteen picked Muncie, figuring Maria would be drawn to a town one of the most dangerous men in America calls home. He nudges me in the ribs and turns to the match, reciting their names: Melody Mayhem, One-Hit Wonda. Soulseeker. He focuses on Rogue’s scrum tactics as the first half closes. Then asks if anyone requests “The Night of the Johnstown Flood” from the DJ during the break. When I shake my head, he stands. Tips his hat. Says he’s heading back to Ohio to check out the Burning River Rollers. I tell him I’ve never heard the Johnstown song. He pauses before saying, Someday I’ll have to record it. 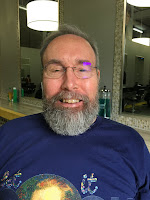