A Quiet Ghost, by M.J. Arcangelini, reviewed by Rusty Barnes 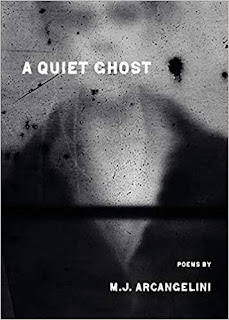 M.J. Arcangelini's  A Quiet Ghost is a quiet revelation. Through a series of short narrative poems, Arcangelini takes us through and beyond all the stresses that come with open-heart surgery. Even the epigraph from Moby Dick from which the book's title emerges, we see already the signs of a careful poetic mind setting a deliberate tone.

In "Expiration Date" a poem which treats Arcangelini's heart as a product with a date beyond which lies death, the stanza is broken up by three indented instances of the words 'expiration date'  and more later on which serve to warn us that what is coming might uh, be grim. "Spread across three arteries,/repeated, a motif, a design, a sign,/my expiration date." We can see as the speaker does later on in the poem, this doom arising to greet him as the speaker observes the doctor,

seen my expiration date and/

he was about to throw me/

in the freezer to see how/

The one catch in this lovely stanza is the ending 'and' in line 2 but I'll forgive that for the apt freezer metaphor. Something else a reader might not immediately notice about this poem is that in its twenty-one lines we have an entire scene, recognition, shock and loss and grief. It's a fine poem for the near-front of the collection.

For a poet so rooted in fine observation, the incredibly precise self-reflection the poet provides in the latter half of the book shouldn't be surprising, yet it is. In the prose poem "Under" the speaker talks of comparing himself to a 'handcuffed steroid case' as he is presented with the evidence of his medication-addled struggle with nurses, the bruises left on his wrists from the restraints used. The last paragraph of the poem slams its point home.

To have the drugs release all constraints on action

leaving me free, as free as that guy in the elevator'

in the move, to do what feels right at that moment.

To live and act without restraint if only for the

briefest time as I am about to die and then to

live just long enough to savor how that feels.

The final poem in this short but powerful book is my favorite. Cleverly titled "How the Heart Speaks," it plays off the Hallmark card sentimentality of its outward message only to dig deep as the rest of the book does, to a splendid and satisfying conclusion. "This odd sensation in my chest/like a cat stretching and yawning/emerging from a nap." This comfortable image belies its seriousness for a heart patient. Movement in the chest? Ye gods.

Later in the poem: "Is this it? Is my time up?/Has my heart finally decided/ it has had enough and quit?" That string of rhetorical questions after the sharp observations seems to obviate the need for another stanza, but  wait: there's more. "This is how it speaks to me,/clutching at things unsaid to/tell me something uncertain." When the heart speaks, it always moves from the unsaid or the unsayable to something like uncertainty.

Arcangelini's poems are short, sharp, and quick in their deadly accuracies, and with a fine career behind him, now that the surgery is past, we dare to hope for more from him in this vein, the short narrative poems that are our lives. Bravo.