By Heather Sullivan January 15, 2021
Sandpiper
I run along life's shore
dodging the cold spray
of those surfing
the same waves
of past slights,
real and reimagined,
until the storms
transform into tsunamis
These champion surfers
are charged by the
surge of drama,
never growing weary, and
I've become an accomplished
long-distance runner,
avoiding their heavy, wet sand
in my shoes. 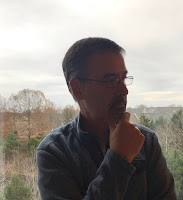 David Cranmer is the editor of the BEAT to a PULP webzine and whose own body of work has appeared in such diverse publications as The Five-Two: Crime Poetry Weekly, Needle: A Magazine of Noir, LitReactor, Macmillan’s Criminal Element, and Chicken Soup for the Soul. Under the pen name Edward A. Grainger he created the Cash Laramie western series. He's a dedicated Whovian who enjoys jazz and backgammon. He can be found in scenic upstate New York where he lives with his wife and daughter.