Early in the book of Genesis, Adam names all of Earth’s animals. Even in myth’s endless dream time, that is a formidable task. The image of Adam, artist-imagined on one of Eden’s rocks, came to mind while reading Sentinel Species, Chase Dimock’s new bestiary of poems. Dimock doesn’t name the animals. That work is already done. Instead, he either re-imagines them in unique and sometimes comical situations or he utilizes them as catalysts for introspection and discovery.

The best-titled poem in the collection, “Burying my Dog Behind the Ronald Reagan Presidential Library”, illustrates how animals help to mark timelines of grand history and ordinary lives. The poem begins, “In the hills of my hometown / I have witnessed the burials / of two house cats / a golden retriever / and the 40th President / of the United States of America.” Dimock then begins to weave through a combination of public events and private memories. In the process, he shows how the public becomes private in memory. 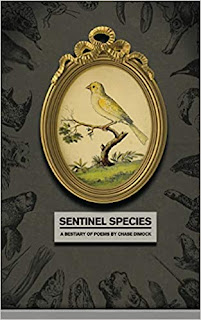 In “Coming Out to a Spider” Dimock imagines a teenage boy grappling with same sex attraction and “the desiring vocabulary of sleep.” He relates the spider’s web to the entanglements of societal and parental expectations. He has the speaker “practice stuttering beneath / the stare of eight eyes at once.” For the speaker, truth comes in the saying. As sex is performative, so is the out loud verbal acknowledgment which leads to it.

Far away from desire is “The Vulture and the Little Girl.” The poem is based on Kevin Carter’s famous photograph taken during an African famine. It is a devastating accompaniment to the photograph. Dimock outlines the image in a few deft lines, then follows the photographer as if he were the vulture’s shadow. What is especially unique about the poem is that its very cohesion does not lend itself to quotation. No one line stands out, but all the lines work together. The poem is like a piece of Amish furniture: deceptively simple, yet tremendously hard to duplicate.

In “American Gothic”, one of the few non-animal related poems within the collection, Dimock shapes a story within the characters of Grant Wood’s most famous painting. In the poem, the artist’s sister has “all the realism / of the rutted earth / plowed across her face.” Like the painting, the poem is grounded in clean lines. It does not draw attention to itself.

Dimock’s style throughout this collection is clear and subtle. His focus is always on clarity and his poems all operate with simple diction. It is that simplicity, that willfulness away from the poetic, which provides this collection’s greatest enjoyment. Dimock is never trendy or posing. His well-built poems stand tall and alone. 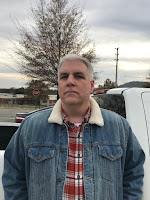 Mike James makes his home outside Nashville, Tennessee and has published widely. His many poetry collections include: Journeyman’s Suitcase (Luchador), Jumping Drawbridges in Technicolor (Blue Horse), and Crows in the Jukebox (Bottom Dog.) He currently serves as an associate editor of Unbroken.