Book Review: John Dorsey, The Afterlife of the Party 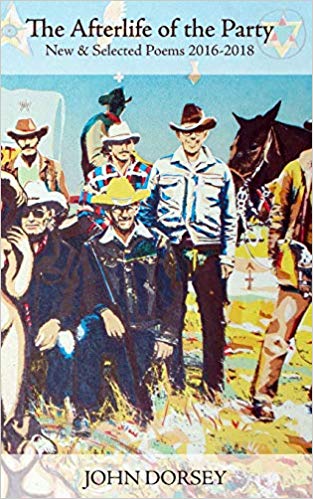 John Dorsey's latest book is a collection of some of the chapbooks he published from 2016-2018 (Analog Submission Press, CWP Collective Press, Indigent Press, NightBallet Press, Red Flag Poetry, Spartan Press, Tangerine Press) plus new poems and an introduction by Mike James. One of the things you can take from this is that 2018 was a pretty fair year for Dorsey publication-wise. He's quite prolific and quite good, and this collection is a solid continuation of the roll he's been on since Appalachian Frankenstein, the book with which I really familiarized myself as regards the Dorsey small press phenomenon.

People are at the center of Dorsey's poems. They're not elegies, really, though some are elegiac, and they're not really portraits either. They are simple sketches of ordinary people in extraordinary moments when the world's focus holds for just a moment, then goes blurry again. Poems are dedicated to people, mostly other poets it seems, both well-known and not. One of my favorites, a short one I'll quote here in its entirety, sums up Dorsey's attitude toward his people, his primary subject matter.

building castles out of bone.


You don't have to know Felino the subject--I don't, though I suspect it's Felino Soriano, who I might have met once when he read at Tim Gager's Dire Reader series in Cambridge MA over fifteen years ago--to recognize and cherish the moment in which Dorsey finds someone tapping the jazz from Felino's already unhearing ears or to appreciate the two tight similes that form the poem's core. It's enough to let the poem rise on those similes and energize itself, only to have the poem resolve into another arresting, if puzzling image. I'm not sure how you build castles from bone, nor am I entirely settled as to who's building them, the hornet, the ghost or the body-finder, as there's no punctuation to help me, but I'm willing to ride along on this short poem's momentum.

In "Poem for My Aunt on Her Birthday," the refrain "you were young once" is elegiac and oratorical at once. I imagine this poem might do well at readings, these repetitions interposed as they are between snapshots of the narrator's aunt's life "before diabetes & mental Illness/before time became just another broken heart."

In a poem not expressly about a person, again Dorsey makes use of subtle repetition, In "Another Reason Why I Love This Town" where variations on the phrase "you might" play off each other to great effect and the poem resolves wonderfully in a gout of dog urine: "her dog pissing out what looks like/a whole pitcher of flat budweiser." Anything can happen in a John Dorsey poem.

Another short poem I found myself returning to is dedicated to a specific person, in this case Christina.

looking for a small red haired girl
in times square
i remember thinking
there are worse ways
for the world to end.


Not with a bang, not with a whimper, but looking for a girl. Anyone who's spent time looking for a significant other or anyone to cling to in this mad old bad world can relate. Also common in a John Dorsey poem, speakers and narrators who search for something in myriad places, due no doubt to Dorsey's often-punishing reading schedule, which once approached a hundred dates a year. All that travel makes its way into the poetry.

On facing pages late in the book, "Round Corner Tavern Poem (for mikey west"' and "The Ghost of Sacramento Past (for gene bloom)" illustrate well the kinds of poems you find in this book that are not about people but instead types or characters. "Round Corner. . ." begins "Every night they mop/ the blood of hipsters/off the floor" and ends "the sadness of last call/is still more useful/than your average poem." There's some existential ennui for you at the end of this collection, which continues in 'The Ghost of. . ." dedicated to Gene Bloom, where the speaker of the poem observes Gene ". . .up half the night/rolling joints in orderly piles/the way they did it in sing sing/the night we put a man/on the moon." This poem neatly orders the complex ghosts of the title into images everyone can feel, particularly in the locative "in sing sing" and the dative "the night we put a man on the moon." What was a poem about some old guy becomes specific and magical, and a nice place to end a review.

Dorsey's skill is two-toned. There's the surface shine of these poems, the insights and the back and forth of people in the rigors of their lives, which is the great and necessary accomplishment of the work. Then there's the craft beneath, the revealed glow, and I'm not sure sometimes which is the stronger element, or if I'm even meant to have to choose. Sometimes the poems risk being surfacey, but then the images stick with me: bones; ghosts popping out when you least expect them like in some video game; hipster blood on a sawdust floor; Gene calmly ordering a pile of joints on the table. I realize then that's the shine, that's what I'm meant to take from these poems. It all comes from the skill and hard work and the risk to lay it all out there. Which is to say, a John Dorsey poem looks easy, till you try one yourself.