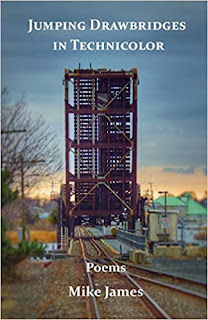 
Mike James is a poet comfortable in several modes. I've read ghazals I liked and excellent free verse, and it wouldn't surprise me somewhere in his extensive catalog of thirteen books to find a formal mode too. He seems like a poet searching for things he hasn't done, and so we find his latest collection, Jumping Drawbridges in Technicolor, from Blue Horse Press, tilting ahead into the prose poem, best of all, the often surreal prose poem of Tate and Simic and Edson. I have no ready store of terminology for this kind of poem, coming at it from the POV of someone who's enjoyed a surreal tone occasionally, though not in steady diet.


My introduction to the surreal was in the early work of Bill Knott, reading whom taught me many things, most important of which was that I was not a natural poet. The lyric is not my mode, the usual narratives sustain me, and the simile and other metaphor, those roots of poetry, do not come naturally to me. All of this is to come, finally, to Mike James the poet, who is indeed fluent in all of these things, and this book proves it.


The lyric is evident in poems like " Oh Daddy, Give Me a Quarter For the Time Machine." in a paean for the Weimar Republic, a nostalgic and sarcastic at the same turn in which the speaker invokes Marlene Dietrich,Walter Benjamin, Brecht and Weill, and of course, some unknown Sally Bowles "at a barstool listening to other people's dreams." A well-done piece.


Compare this with "The Mime," which comes a little later in the book, at the beginning of section III.


So he wanted a quiet place. He found a box with invisible walls. Crawled right in.


After a while, after silence became as empty as a shell and the sound of his breathing was the last thing he wanted to hear, he ran his palms along the walls, hoped and hoped for the exit that was there.


It  reminds me of Simic, though not as sly and perhaps more feeling, where a Simic poem can leave you cold. Other purveyors of the surreal come to mind, too, James Tate and Dean Young, though James charts his own course by staying grounded in the real then venturing beyond where with these others, the venturing itself seems the point. James's poems are the puncturing of the surrealist balloon in the end, while others are content to remain inflated, James always brings us back into the realm of the real.


The best poem in the  book is "The Films of Burt Reynolds" in which the speaker discusses Burt through the film ages and with his various paramours and wives only to close with the speaker's mother saying "she'd marry him if she just stopped by." Successful as  both nostalgia-trip and head-shaking laugh, it is exemplar of this strong collection: never hurried, always sure-footed, and well-worth the price of admission. Pick this one up.