Because a colossal arm of hubris
beheaded a body fleshed together with turmeric and clay,

nursed not at his mother’s bosom but with hands and breath,
splenetic Destroyer of Evil,

the pale of his blue skin, fire of his third eye
cowered to a mother’s sorrow.

rumors of a dead elephant in the North,
his non-decaying carcass starfished across forgotten rubble.

with his head now appended onto that jaundiced figure.
Several gods pose behind him for scale. 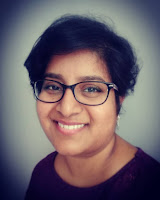 Renuka Raghavan’s previous work has appeared in, Boston Literary Magazine, Jersey Devil Press, Blink-Ink, Star 82 Review, Down in the Dirt Literary Magazine, Chicago Literati, and elsewhere.  She is the author of Out of the Blue, (Big Table Publishing, 2017) a collection of short fiction and poetry. Renuka serves as the fiction book reviewer at Červená Barva Press, a poetry reader for Indolent Press Books, and is a co-founder of the Poetry Sisters Collective. Renuka writes and lives in Newton, Massachusetts. Visit her at www.renukaraghavan(dot)com