West Side Girl & Other Poems by Lauren Scharhag, reviewed by Rusty Barnes 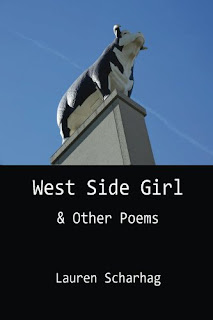 
West Side Girl & Other Poems by Lauren Scharhag assumes a lot of a reader. Plainly produced, the book has a cow on a pedestal on its cover, promising something earthy and plain, maybe, or--I hope not--an excess of irony, like Jim Harrison famously said, I'm a little tired of irony. But that's my problem. The poems' brief cover text says only that the poems were written from 2004-2013, exploring themes of womanhood, family and the poet's German-Mexican heritage. I could have been drawn in a little better, but I like a book already that says plainly what it is.

"Good Bread," on the first page, is a solid poem. "Good woman, good bread,/snug in waxed paper,/clean sheets on the bed." I anticipate the rhyme scheme that never comes, but never get frustrated at its lack, or the knack, of starting with something concrete in those three quick lines that turn into something else by the end. The poem's a celebration of good bread, and the women who have traditionally made it, who were also "the ones who looked at the moon/and baked bread round." This is the kind of poetry that tells us what is important right now in the poet's mind and doesn't equivocate or obfuscate unnaturally.

A little later on, in "The Medium" the speaker of the poem, presumably the poet, describes an artist grandfather "at his easel. . . in a shirt dappled with paint." I appreciate the sentiment of what's being described, but dappled is too easy a word, the image is too easy to carry the crux of the stanza, followed as it is by "hands nicked and chapped," words altogether too common to render their subject timeless. The words mostly not taut enough, running its long lines untrammelled by any attempt to slow down. I also note here a paucity of poetic language, which again speaks to the lack of tension, a single simile the only occasion in a page-long poem.

Overall, the poems are strong, narrative poems in the dominant mode. They surprise occasionally as in "Churrascaria"where "eyelids become peachflesh" or in "Chasing the Worm" where "Satan doesn't have to come to me. I'll go to him." In the best poem of the collection, "The Ages of Woman," the poet tracks a woman's life in stages: Fetus;Girl:Woman;Mother;Barren;Post;Ether. The poem succeeds on the impact of the "Girl" section."Cling to your poppets and doilies.//No matter how life-like,/Their painted stares cannot prepare you and "Harvest these cells if you dare" together with the "Mother" section, wherein the speaker imagines infanticide, and dreams a sequence of events both horrible and common. "And now I am prepared to end/all your possibilities,/all possibility of us." which lines grip and move a reader even knowing from the remainder of the poem what's coming, or not coming. This is a poem that rewards revisiting for the sheer power of the woman revealed.

Overall, the book is successful, but the terms of that success are determined largely by how willing you are to give yourself up to the forces of intuition and insight, and not necessarily the power of an individual line. I'm interested to see what Scharhag is writing now. 3.5 of 5 stars.