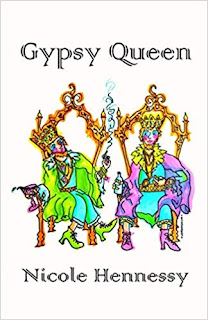 Nicole Hennessy's Gypsy Queen, #109 from Crisis Chronicles Press, is a representative small press text in many ways. Filled with free-verse poems that tend toward the long and discursive, the book is arranged in such a way that the poems' performative aspects are in full effect, with strong voice and lots of sound-play. In "Vultures," a poem in five short sections, the speaker says to the potential partner "Tell me everything about me./Leave no room for me to tell you." which is a nice effect, as potential partners in the beginning usually say "tell me everything about you," so it's an intriguing beginning. We know this speaker is all ego from the get-go, doubling down on that initial statement by confessing just a few lines farther down:

I knew we'd walk to that cemetery together
I wanted to tell you something about myself
through those streets alone, along which I'd grown
and still wander windingly in dreams. . .
. . .Told you I needed to center myself.
I was trying not to know I want to know you.


Section II begins. "My eyes are sunken boats, wrecked in their own stalls" and Hennessy continues with the water metaphor throughout the section and into section III then inexplicably drops it just as it begins to give the poem some power, in order to bring in the vultures of the title. Via the Mayan myth that says "vultures [are] consumers of death converted back to life" the speaker suggests that to see a vulture implies one should be patient and to think things through, presumably referring to the connection made at the beginning of the poem. This seems like a perfect opportunity for more water metaphor--cenotes perhaps--to connect this section to the previous two more fully, but the connection never fully fuses. Instead, Hennessy brings us back to the cemetery from the beginning and to some exits that are also entrances, in an ending that intrigues with its possibilities yet underwhelms at the same time. I'm damned if I know exactly what is happening in the poem, but I want to know more.

Unfortunately, this is a theme that continues through the remainder of the book: intriguing images, some wild metaphors, but many lines that strive toward complexity but say little, as in another long poem, "Sometimes the Sun."


I respect the effort, but remain uncertain as to what, literally, is going on here and in many of the poems, and so I'm unable to commit fully to the poet's vision. I like Hennessy's way with language in spots, and in other poems I appreciate the insight, but the two elements don't coincide enough to entirely succeed. This is the way: some things resonate, some don't. Maybe these elements I've described appeal to you, and if so, you should give this book a shot. I wholly respect the effort. 3 of 5 stars.